Plants of the Month – February 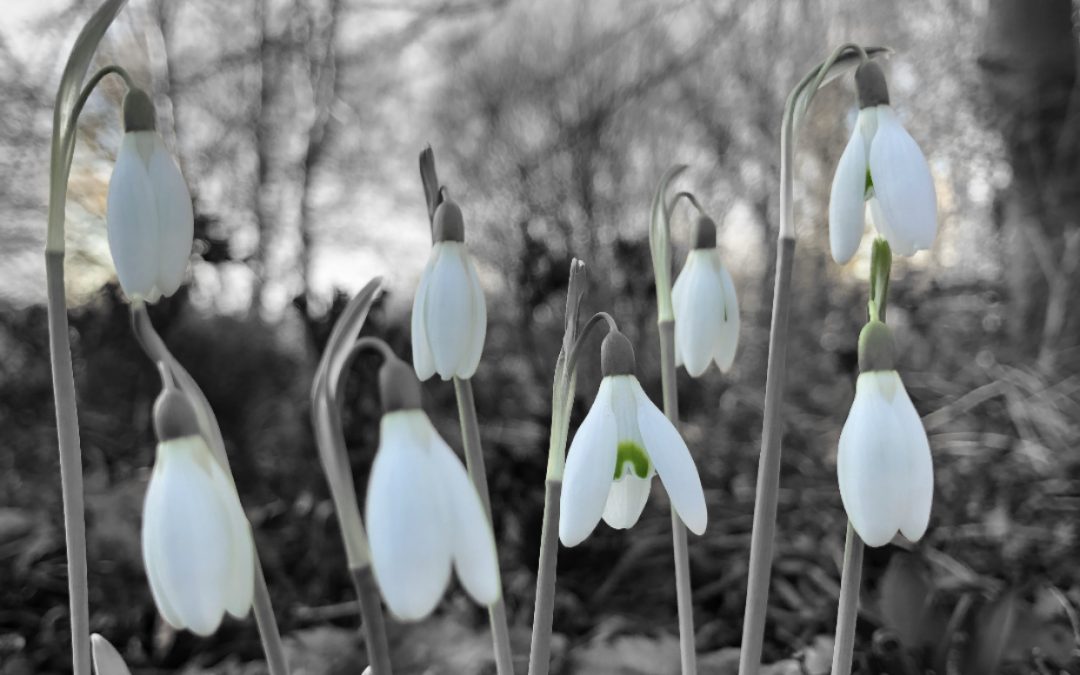 February is a time when the grip of winter is slowly letting go and the first signs of spring are beginning to appear. Even here in East Kilbride, where it can seem as if the damp, cold, wintery weather lasts 6 months of the year, there are early signs that the season is changing. The plants I have chosen for Plants of the Month in February that are growing in our garden are snowdrops and an Acer tree with an unusal colour of bark. I’ve also added a few extra colourful suggestions for February at the end of this blog. 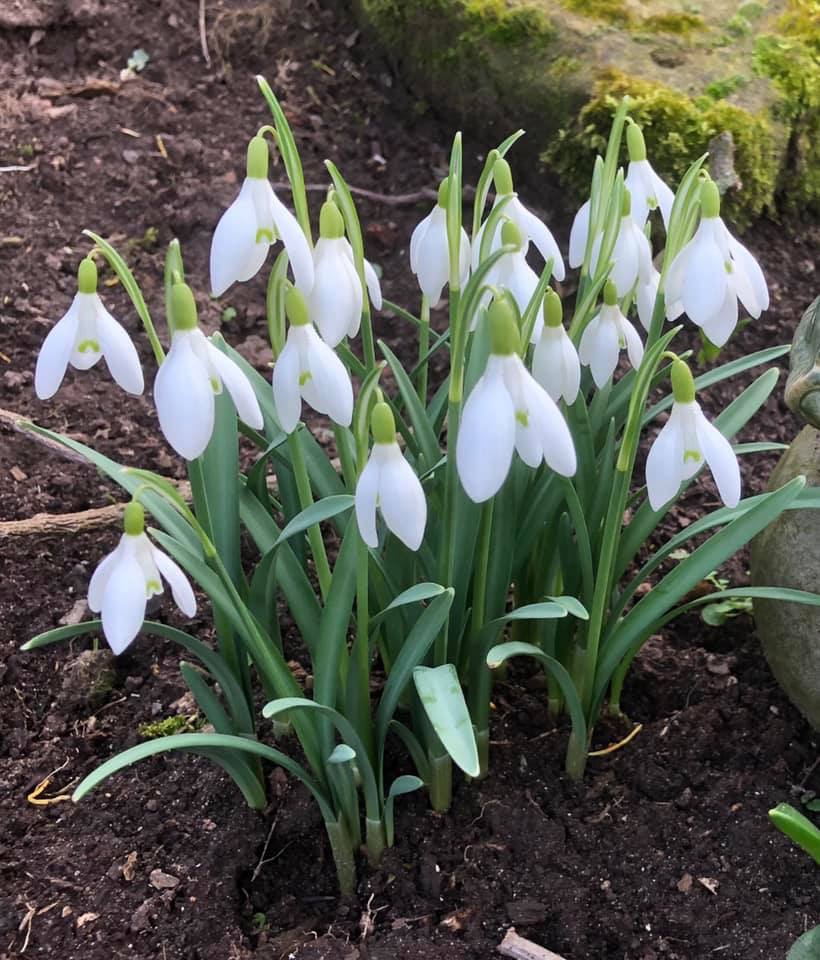 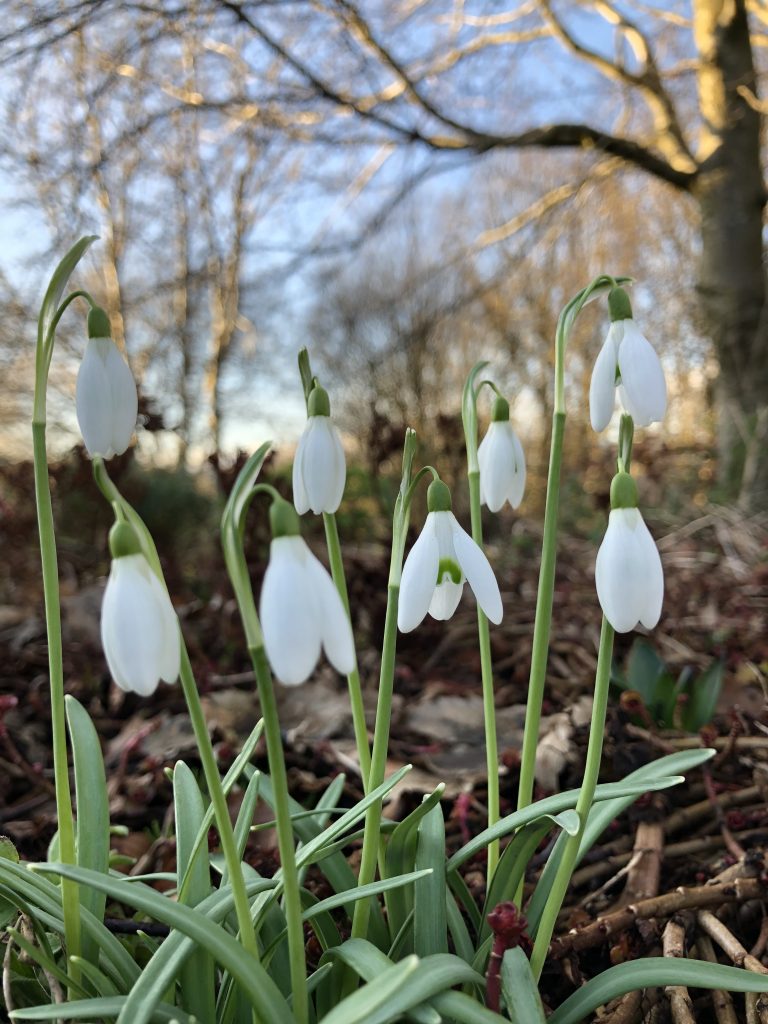 I don’t think there is any other plant quite as special and as recognisable as the snowdrop. It is one of the first flowers I remember identifying as a child. For me and for many others the snowdrop signifies a new year, a fresh start, and a garden awakening from its winter slumber. For many people, spotting the first snowdrops to appear in gardens and green spaces is an annual ritual.

It’s thought that many of the first snowdrops in the UK were brought here by returning soldiers after the Crimean War, which ended in March 1856. They brought these flowers back for their sweethearts. I like to think there are decedents of these snowdrops out there now, still signifying enduring love and hope.

There are actually British plant records dating to the 1500s referring to what we now call snowdrops, although it wasn’t until perhaps the 1600s that the word ‘snowdrop’ was being used to describe the name of the Galanthus (milk flower) plant species.

There are now said to be around 2,500 different types of hybrids, cultivars and variations of snowdrop. Some of these varieties can easily fetch prices of £50, £60, £70, and even hundreds of pounds for a single bulb. The most expensive snowdrop sold recently for and eye watering sum of £1,390. Personally, I’m happy growing the common snowdrop, Galanthus Nivalis.

Galanthus Nivalis is most likely the plant you will find growing widely and easily in gardens, and they can be purchased in clumps or pots for just a few pounds. It’s not to say I don’t like the other varieties, I do. I have a yellow variety called ‘Sandersii’ and a taller variety called ‘William Thomson’. I paid £10 each for a single bulb of these varieties. I love them, and they are special to me. However, nothing quite beats a clump of common snowdrops emerging from the ground each year in February to remind me that spring is here.

Definitely plant some snowdrops in your garden. Just make sure the ground isn’t too boggy. No bulb is going to like sitting in wet soil. They’ll rot. Try a drier spot, or perhaps plant them around the base of a larger plant that’s in a pot. Each year in February you’ll be rewarded with the joy these little plants bring. You can even try different varieties that will flower earlier (December) or later (March). The choice is all yours. 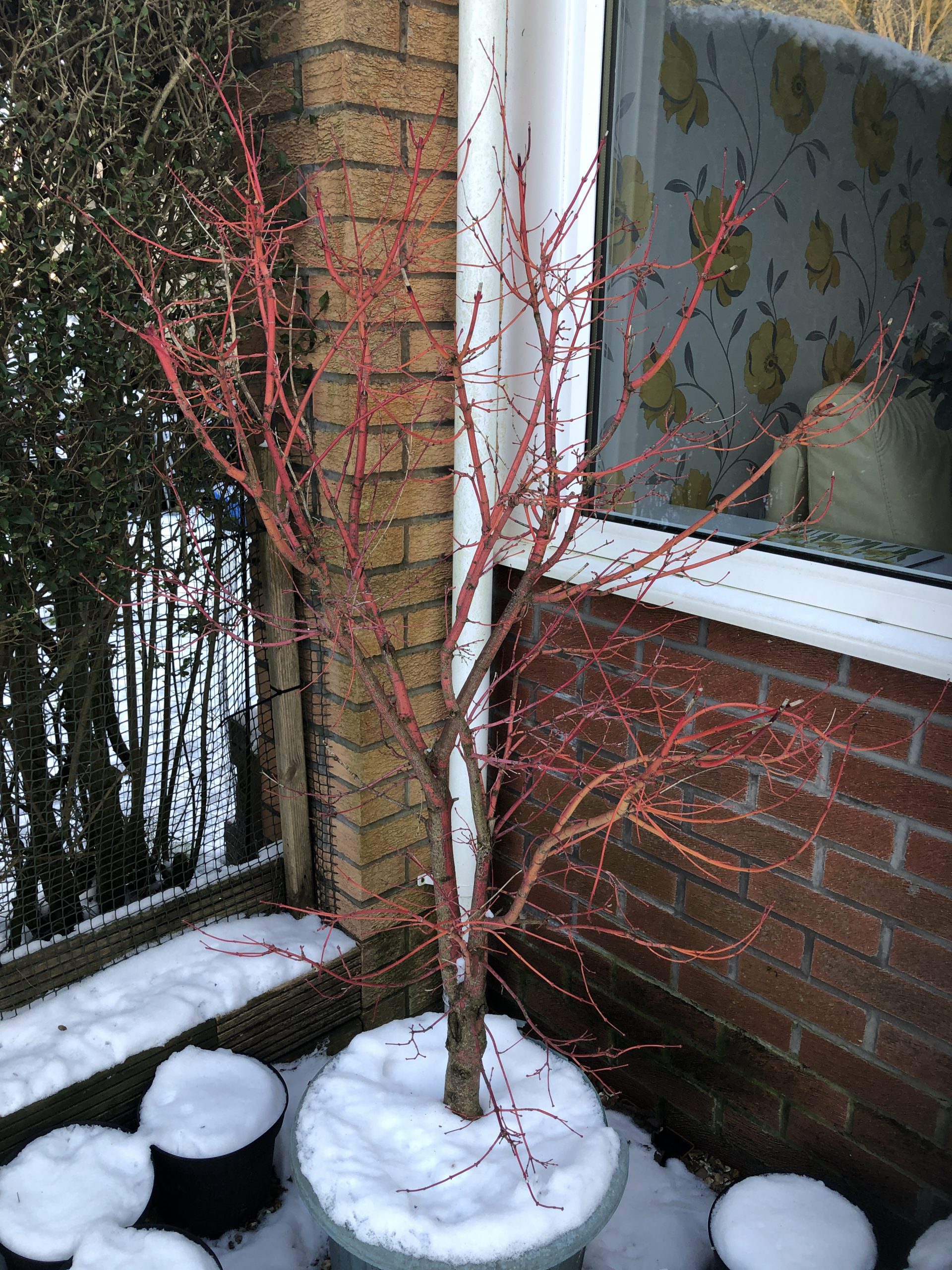 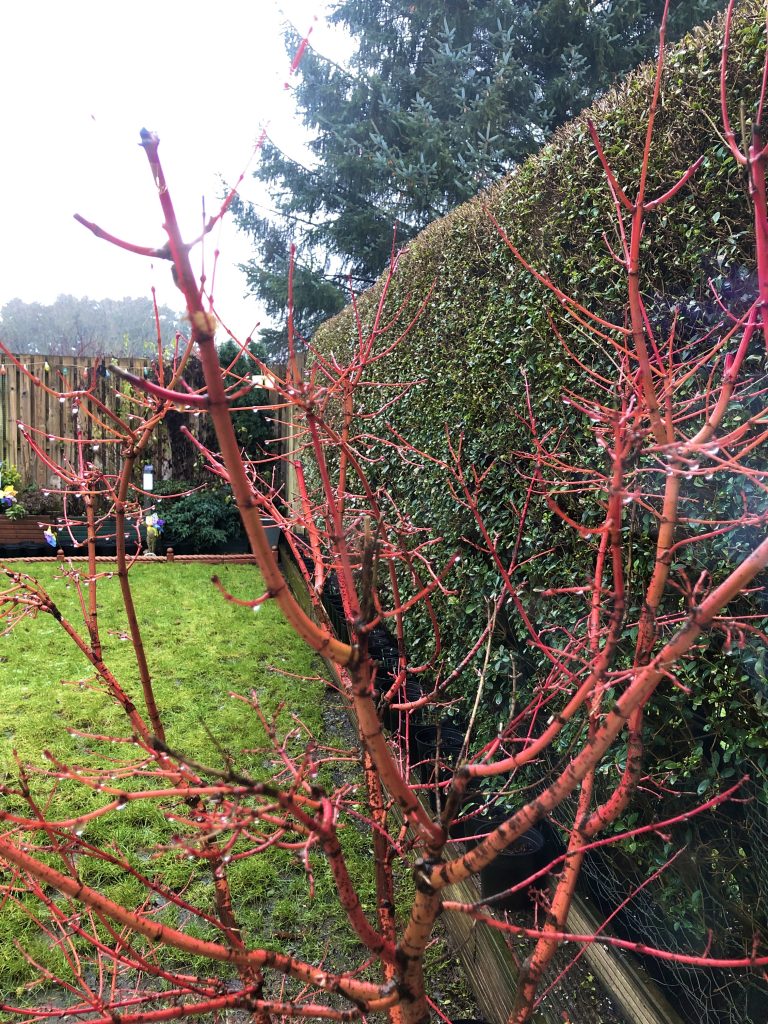 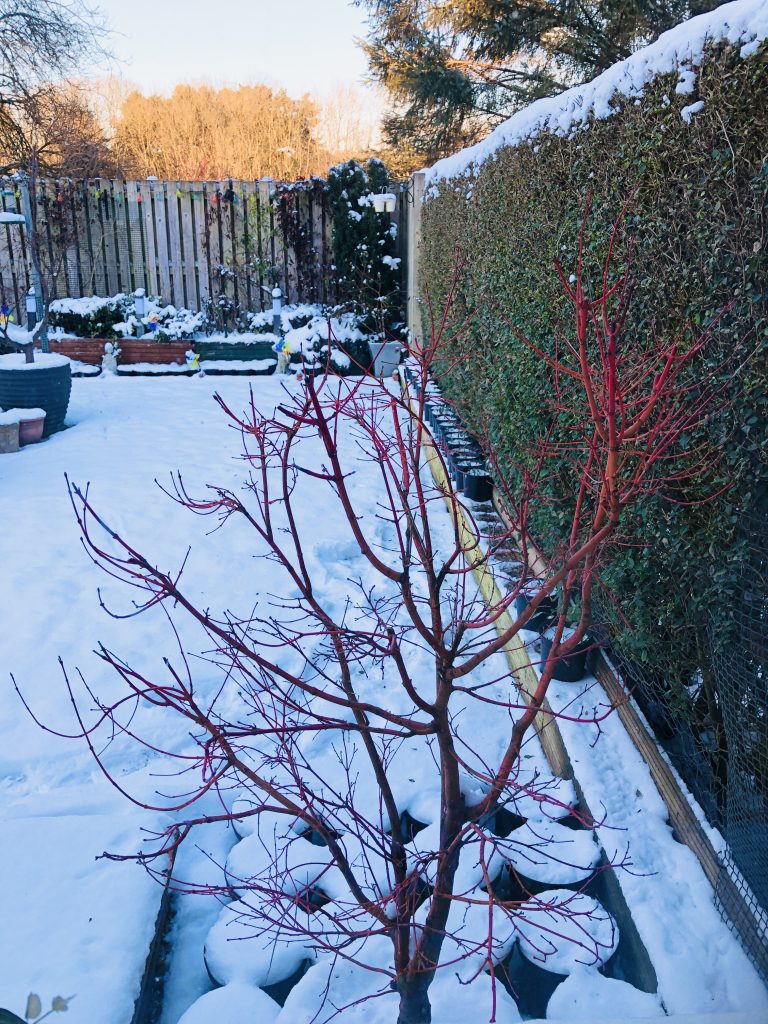 It may be quite strange to include a small deciduous tree (a tree that loses all its leaves in Winter) in this plant of the month blog in February. It has no leaves on it at all at this time of year. However, this particular tree, ‘Sangu Kaku’ (coral tower), is also grown for its beautiful looking bark.

This tree does have lovely almost lime green leaves in summer, that turn orange in autumn. However, when it looses its leaves there is the added bonus of the striking pink / red coral bark. It’s beautiful. It’s also a great colour contrast to the rest of the garden at this time of year. This is why I think it’s a great plant to include in this month’s plant of the month.

Acers are not the cheapest plant to buy for the garden. They are quite slow growing. To grow them on to a metre in size, or even two metres, takes quite a few years and a bit of attention. You are going to pay about £50 for a small sub 0.5m plant, and £200+ if you are looking for one that’s getting up to the 1.5m- 2m mark. So they are a considered purchase.

Our coral bark Acer sits in a pot. It’s always been in a pot. It grows happily in there. We do feed it in spring, and obviously being in a pot it will rely heavily on human intervention for water in the dry summer months. When you pay a lot of money for a plant, you really don’t want to forget to look after it. We can move it around our rear garden if we want – we’ve had it in various spots and move it when we rearrange the garden (I think I do this nearly every year). This Acer currently sits near a window in a fairly shaded area of the garden. Acers aren’t particularly fond of exposure to spots that get the sun from morning until night, nor are they fond of getting battered by cold winds. It’s best to pick a spot that gets a bit of shelter from both these elements.

We have two other Acers in our garden in East Kilbride (‘Bloodgood’ varieties). They also grow in pots. They’ve been happily growing in pots for about 10 – 12 years. If you look after them it’s possible Acers could last a lifetime.

Other plants to consider for a bit of colour in February. 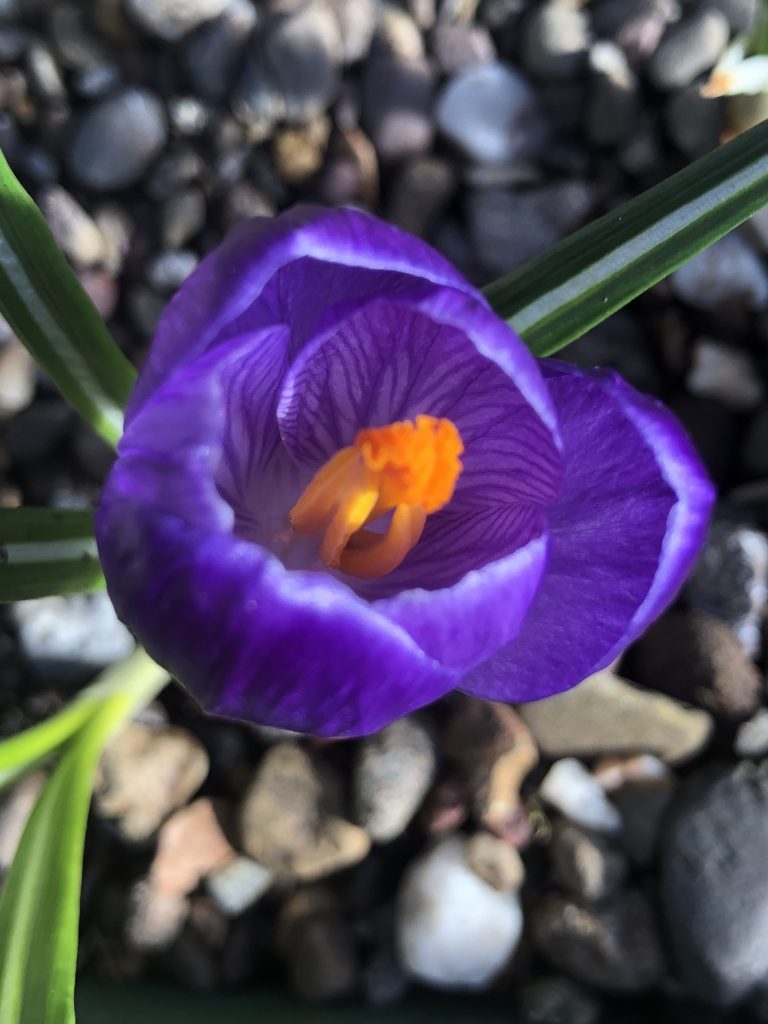 Most Crocus tend to come into flower for us living in East Kilbride in the month of March. However, if you search for an early fllowering variety you could be blessed with a splash of colour towards the end of February. This is a Crocus ‘Flower Record‘ flowering nicely outside our front door in February. 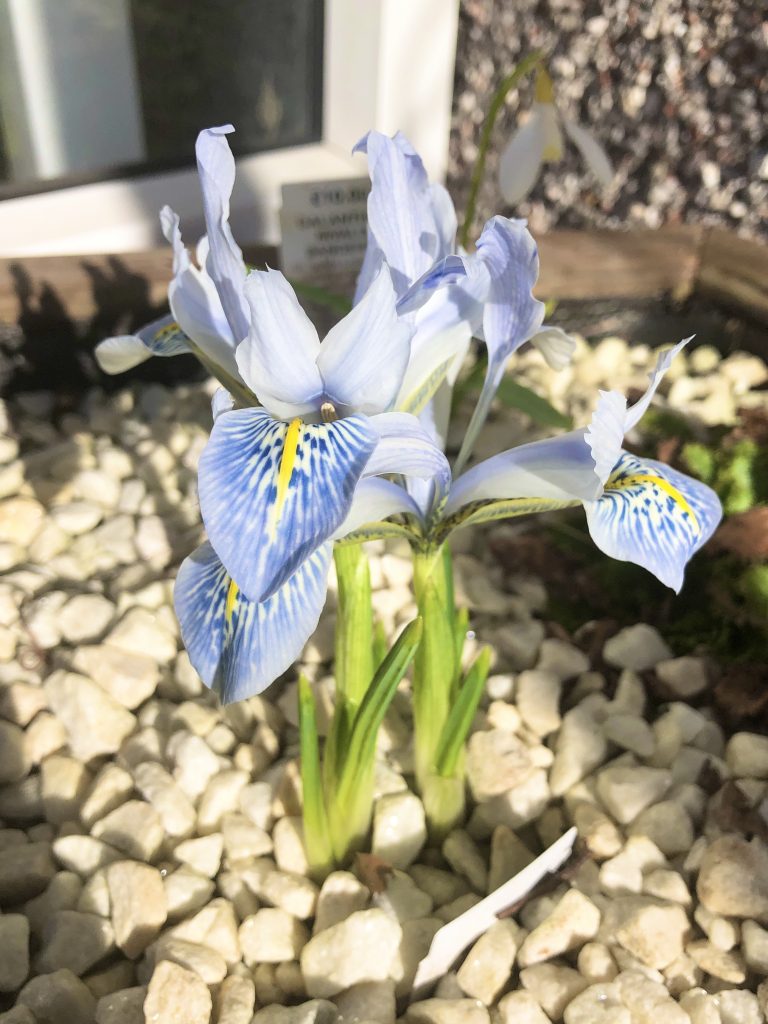 We do have a few other Iris plants that don’t flower until later in the year, but it is possible to get early flowering varities. This Iris ‘Sheila Ann Germaney‘ sits in an alpine planter outside our front door. It’s stunning in February. 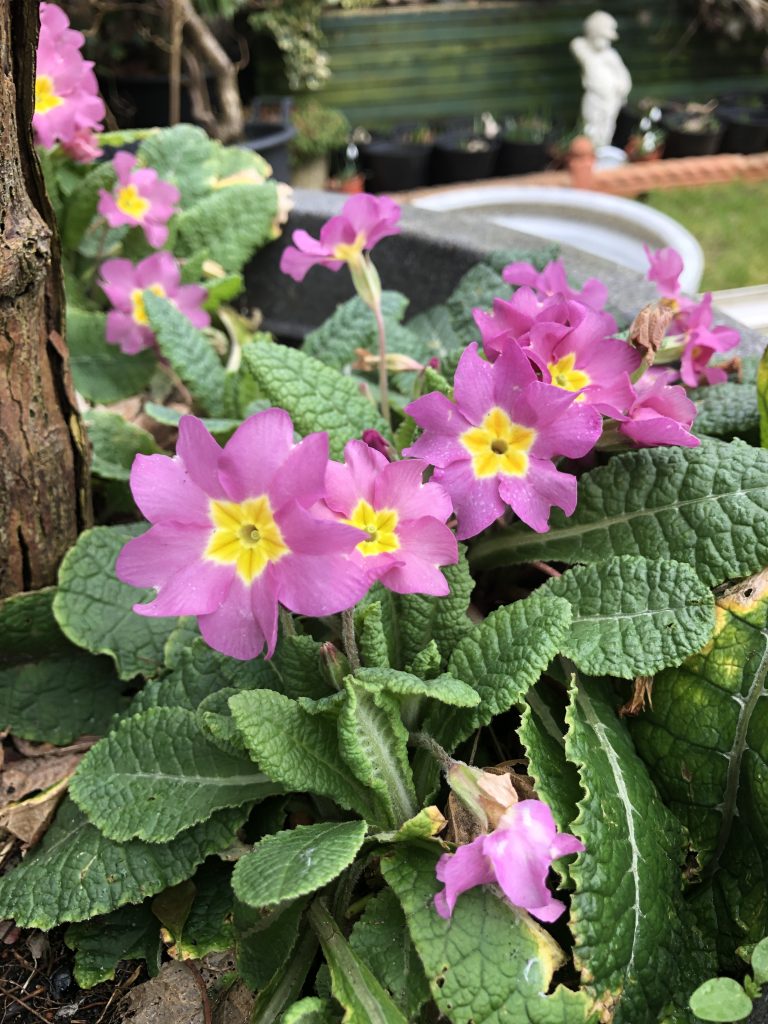 These pink Primulas (I don’t know the particular variety) have been growing in our garden for probably close to 20 years. They are one of my favourite plants. They’ll be in flower now for months. We currently grow them at the base of our two Acer ‘Bloodgoods’ that we grow in pots. This photo was taken near the end of February.